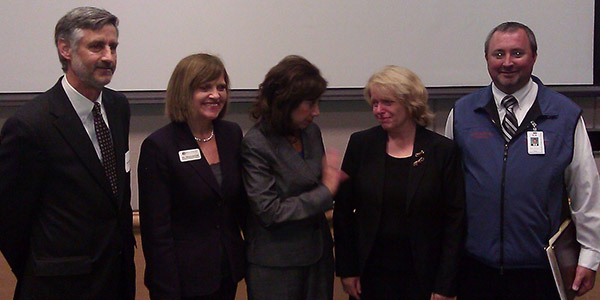 On Friday, October 12th, Senator Patty Murray (WA-D) and US Secretary of Labor Hilda L. Solis (center) joined Bellevue College’s Paula Boyam (second from left) and Patricia Dombrowski (second from right) for a tour of the health information technology program facilities at Bellevue College, as covered by the Bellevue Reporter.  Their presence here coincides with a $11.8 million grant to the college to support a health IT apprenticeship and career services program, which the Veterans Apprenticeship Program was a part of. 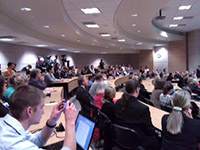 Dr. Lynn Wilson along with Mick Plath initially worked with Bellevue College to instate a program to assist returning veterans to rejoin the labor force.  Veterans often have difficulty finding jobs after they’ve left the military.  This problem is exasperated for wounded, injured, and service-disabled soldiers who pursue personal recovery before they can adjust to civilian life.

no credit check payday lenders only

The Veterans Health IT Registered Apprenticeship portion of the program is designed as one possible pathway for veterans to seek employment by allowing them to train for document IT and workflow management in health care offices.  Physicians and health care providers have an interest in getting a meaningful, valuable use out of their infrastructure as a whole, and especially their Electronic Health Records (EHR).  Well managed EHR is important for quality care and avoiding lawsuits, but it’s also an important factor in collecting benefits and avoiding penalties that are associated with participation in the Medicare and Medicaid programs.

This $11.8 million grant to Bellevue College seeks to fill the gap between businesses that are looking to hire trained workers and people who are prepared to work, but don’t yet have the training.  The program, called a Health IT Apprenticeship and Career Services Program, will involve 2,000 participants and help from eight other colleges.  This grant constitutes the largest ever received by the college in its 50-year history, and comes as a part of the Trade Adjustment Assistance Community College and Career Training Program, a $2 billion division of the American Recovery and Reinvestment Act of 2009.

Although Dr. Wilson (prime contractor for the Veteran’s Health IT portion) wasn’t able to attend the announcement, Mick Plath was in attendance when Senator Murray and Secretary Solis spoke following their tour of the health information technology program facilities of Bellevue College.  Senator Murray was adamant about the significance and value of the program, saying that “Jobs are open, but people are not skilled in the right place.  Business people are looking at education to fill that skills gap.”  Solis observed that, “Healthcare is recession proof and it’s going to continue as we move out the Affordable Healthcare Act.”  Solis credited Murray and President Barack Obama for passing the grant, saying, “I don’t dto this alone, I can only do as much as my senators and congresspeople.  That’s where the purse strings are.”

The Future of Veterans in IT

With the program funded and the labor demand apparent, we’re one step closer to connecting eager employers with returning veterans who are well-educated and available for work.  This will ensure not only stability for veterans in the workforce, but also quality health care for decades to come.

Congratulations to Bellevue College’s Patricia Dombrowski and Paula Boyam and the Washington community colleges that received this prestigious honor.