Standard CD’s and DVD’s today should only be used as a transport medium. You might think that you are making a historical or permanent backup of your documents and files when you put them on a DVD or back them up to hard-drive, but the reality is that these discs always suffer from natural degradation.

Today’s DVD construction uses organic dyes and lasers with low power etch marks on the data layer of a standard DVD. Over time, the marks become unreadable due to the organic dyes degrading when exposed to low levels of light, heat, and humidity. Therefore all of the data that you thought was stored safely could easily be lost. This is because the discs you used only have a lifespan of only about 3 to 5 years! Why risk your data based on an average; the hundreds of discs studied in that average were ended up corrupted and unreadable after a short period of time. With Millenniata, you won’t run the risk of losing data. We say “Write Once and Read Forever™”, and we mean it. 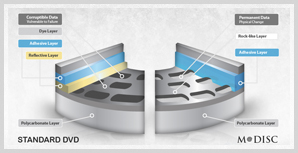 With the M-DISC a permanent and physical change takes place that does not fade or deteriorate. Today’s DVDs and CDs use dyes that will break down in time resulting in corrupt and lost information or data.

How does the M-Disc compare to DVD’s and optical disks?

The materials used by Millenniata are chemically stable and heat resistant materials and are not used in any other DVD or disc! The materials cannot be erased, overwritten, or corrupted by any natural process. Normal laser energy used to write DVDs or CDs won’t successfully write to the patented and inorganic and synthetic materials used in the M-DISC.

Data is kept on the M-DISC by physically changing the recording layer and making permanent voids or holes. Optical discs use organic dyes that will break down in time, resulting in corrupt and unreadable data. The organic dyes are very susceptible to temperature, humidity and sunlight and start to fading and decay the minute you start recording data.

M-Disc’s recording process uses higher temperatures than ordinary optical discs. It allows for permanent engraving on the M-DISC, or what we refer to as pits. The pits aren’t affected by temperature, humidity and sunlight the same way the dyes are, because pits are permanent. It means when you burn data onto the M-DISC, it will last as long as you want.